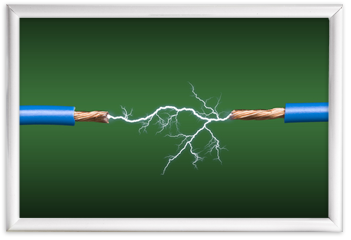 Electrical hazards that can lead to serious injury and even electrocution often go undetected because electricity is virtually unseen and unheard. An Arc Fault Circuit Interrupter (AFCI) is a circuit breaker designed to prevent fires by detecting a non-working electrical arc and disconnecting the power before the arc starts a fire. An arcing fault can be caused by loose or improper connections, damaged, overheated, or stressed wiring, cables, or electrical appliances.

Over 165,000 fires are caused by faulty electrical wiring; many attributable to arcing faults Unwanted arcs can generate dangerously high temperatures which can cause surrounding materials like insulation or wood to burst into flames. The U.S. Department of Housing and Urban Development reports an absence of AFCIs in the home as one of three key residential hazards that can potentially result in serious fire-related injuries.

Prevention is the antidote to electrical emergencies and serious injuries. Call Thomas Edison Electric to safeguard your home with AFCIs.

Conventional circuit breakers only respond to overloads and short circuits, so they do not protect against arcing conditions that produce erratic current. An AFCI is selective, de-energizing the unwanted arc, reducing the likelihood of fire.

GFCIs are designed to protect against electrical shock. When deviations in electrical current are discovered by GFCIs, power is immediately shut down, preventing serious shocks and electrocution.  The National Electrical Code mandates GFCI protection for kitchen and bathroom receptacles, garage wall outlets, most outdoor receptacles, and all receptacles in unfinished basements and crawl spaces.

Contact Thomas Edison Electric to safeguard you home with AFCIs and GFCIs..

Thomas Edison Electric is at your service!