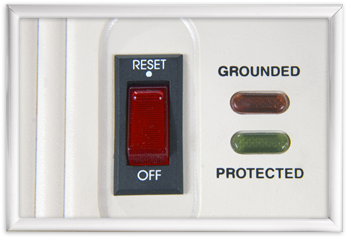 Prevention is the solution to saving expensive electrical appliances and equipment in your home, as well as valuable information on your computer, during an electrical surge. Whole house surge protectors ensure that you will not have to replace expensive items nor worry about retrieving lost data that takes so much time to acquire, only to be lost in an electrical surge that lasts seconds.

Thomas Edison Electric installs vital whole house surge protectors to safeguard all of your home's electrical operations. Damage from surges is a key source of electrical equipment failure. It is vital to be protected from surges that can be initiated by both interior and exterior causes.

Power surges occur when something boosts the electrical charge at some point in the power lines. These cause an increase in the electrical potential energy, which can increase the current flowing to your wall outlet. Many different things can cause this to happen.

The most familiar source is probably lighting. Another cause of power surges is the operation of high-power electrical devices. This kind of equipment requires a lot of energy to switch on and turn off components. This switching creates sudden, brief demands for power. While these surges do not share the intensity of a lightning surge, they can be severe enough to damage components, immediately or eventually.

Other sources of power surges include downed power lines and problematic wiring.

It is persuasive how many items in your home require protection from an electrical surge, including your refrigerator, computer, washer/dryer, air conditioner, telephone, television, security system.

Call Thomas Edison Electric today and be protected.  The only surge you should experience in your home should be the excitement of a surprise birthday party.